At Kanteena in Lancaster for Light Up Lancaster 2021
Haiku Salut are an instrumental dream-pop-post-folk-neo-everything trio from the Derbyshire Dales. The group consists of multi-instrumentalists Gemma Barkerwood, Sophie Barkerwood, and Louise Croft. Between them, Haiku Salut play accordion, piano, glockenspiel, trumpet, guitar, ukulele, drums, and melodica. Their music also features electronic elements, which they refer to as “loopery and laptopery”.
Haiku Salut are famed for their mute performances, allowing the music to cast its magical spell. One memorable live review described them as “an experimental orchestra made of loop pedals, accordions, melodicas, and god knows what else. It feels like watching Mary Poppins pull another instrument out of a never-ending bag.”
In April 2013, the trio debuted their Lamp Show, in which they are accompanied by a stageful of vintage lamps which are programmed to flash, fade and flicker in time to the music. The band have since toured the Lamp Show around the UK, playing in a host of venues – a library, a ballroom, a theatre, a Victorian swimming baths, and several churches and now, Kanteena in Lancaster.
Featuring a special performance of A Song for Lancashire by Little Boots performed by LYVE & a set from Hymns for Robots Live Electronic Music Session. 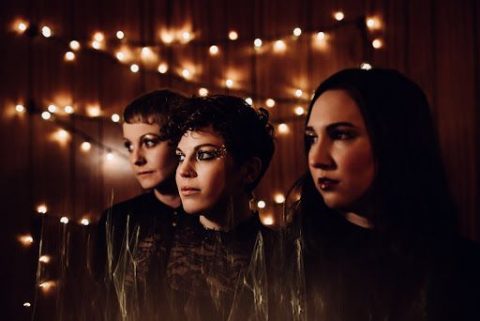