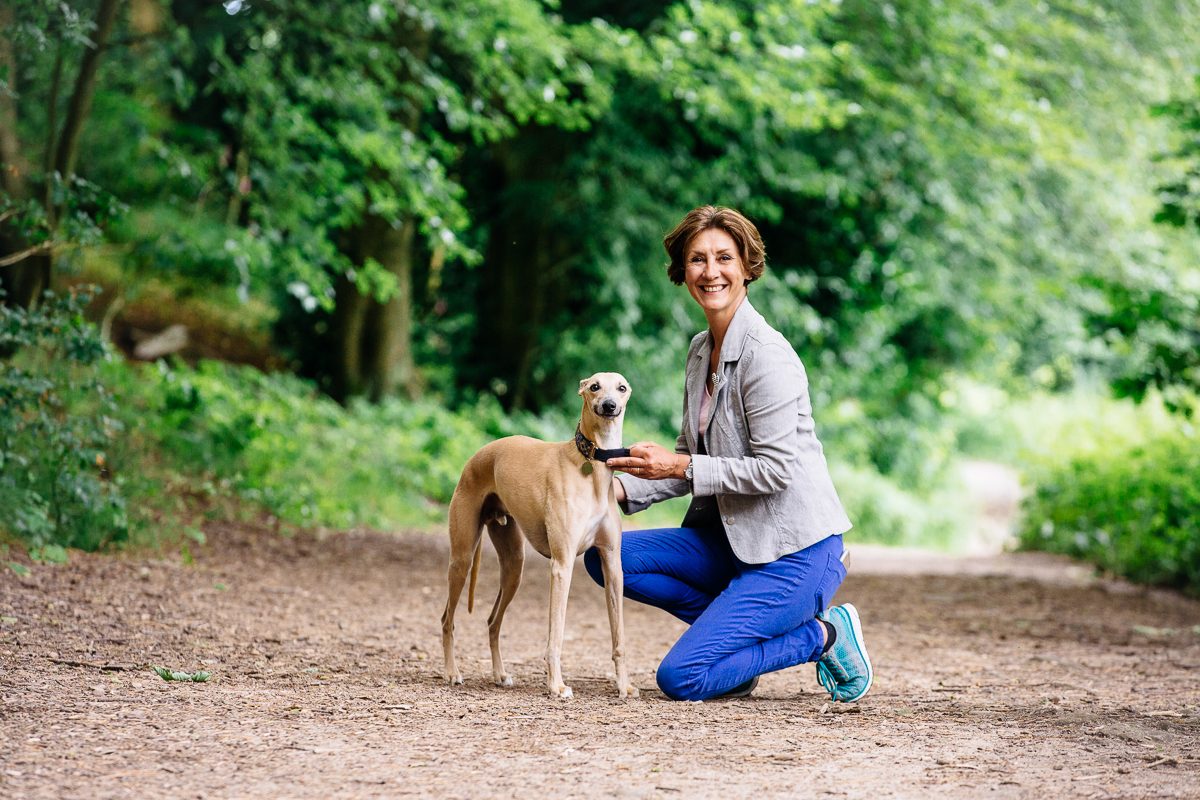 Historic Lancaster is a city of stories and heritage. It is a city where the past sits comfortably with the present.  Splendid stone façades hark back to its heyday as a Georgian port; quirky independent shops rub shoulders with a smattering of well-known stores; museums and monuments are enjoyed by young and old.

Refreshments:  Plentiful along the entire route.

Walk along the side of the Priory to the top of the steps. From here you can see the history and heritage of the city laid out before you. The magnificent Georgian buildings tell of the riches that were made during Lancaster’s heyday as a bustling port on the spice route.

Look out for: On the skyline you can see The Ashton Memorial, completed in 1909, after being commissioned by Lancaster’s foremost entrepreneur Lord Ashton.  Around it spreads a spectacular park with a café and butterfly house, an atmospheric place to while away an afternoon.

Now, turn around and look at the Priory itself. You are standing on ancient hallowed ground – it is believed that Christian worship has been taking place on this site since the 2nd century – the Romans arrived in Lancaster in about 80 AD. The Priory itself is very old and was granted a charter as a Benedictine Priory in 1094.

Turn again and look at the Castle (No. 2 on Map). It started life as a Roman fort and has a thrilling history of dungeons, witches, knights and martyrs. It is here that the Pendle witches were tried and condemned to the gallows which in those days was near The Ashton Memorial. From where you are standing you can see Hanging Corner where the public executions were held in the 18th-19th centuries – imagine the thousands of people who gathered where you are standing to watch.

Look out for:  The castle’s Shire Hall on the right is still used as a Crown Court. The older part of the Castle dates back to the mid-12th century. You can take a tour around the Castle – see the old prison wings which only closed in 2011 and be locked in the pitch black dungeons!

Time to move on. With the entrance to the Priory on your right, walk around the clock tower noticing the spectacular
view of the coast – it’s easy to see why the Romans chose this site for their defences. You will see a lane in front of you – follow it down; on your right amongst the undergrowth is the spot of a Roman Bath House (No. 3 on Map). Keep going until you reach the Quay.

Imagine: Transport your mind back to the 1750s, Lancaster’s bustling quayside was England’s 4th largest port – you would have seen jostling crowds of sailors, merchants, errand boys, traders and ladies of both good and ill repute. You can still see the Custom House which is now The Maritime Museum.

Follow the riverside path staying on this side of the river, take the walkway onto and back off the Millennium Bridge until you turn right into Water Street and crossover Cable Street (No. 5 on the Map). Cross the main road into Chapel Street and notice St John’s Church (No. 6 on Map) which was built in 1754 when the port was expanding. Every Sunday rich merchants came here to make their peace.

Keep to the right and walk up ‘Stinking Lane’ which at some stage in its history was renamed as the current (and more fragrant) ‘Rosemary Lane’. Before you cross, look up St Leonardgate (No. 7 on Map) to your left to see more Georgian merchants’ houses and the renowned Grand Theatre built in 1782.

Carry on up Great John Street and when you get to Dalton Square (No. 8 on Map), stop and ponder the Town Hall, another gift to the city from Lord Ashton, to house the city council, its public services, a court, banqueting suites and a large concert hall.

Look out for: The monument of Queen Victoria in Dalton Square was given to the city at the same time and features 53 eminent Victorians at its base.

Cross over and turn left into Gage Street, continue through Ffrances Passage (yes spelt correctly) into Penny Street and turn right until you reach the crossroads with Market Street (No. 9 on Map). Here you will see a horseshoe set into the pavings. Legend has it that it was John O’Gaunt’s horse that cast its shoe when galloping to the Castle. Carry on up Market Street to Market Square (No. 10 on Map).

Look out for: On the wall of the pub in Market Square you will see a plaque that tells you that Bonnie Prince Charlie was declared Regent near this site in 1745. The City Museum (No. 11 on Map), once the Town Hall, is also in this square.

Sun Street and the Music Room

Keep walking up Market Street until you see a small ginnel on your right behind Barclays Bank. This is Sun Street, it was built around 1780 and it cuts through what would once have been the dramatic gardens of a prosperous Georgian lawyer.

Look out for: The Music Room (No. 12 on Map) on your left, this would have been a beautiful folly in the ornamental gardens. The nine muses decorate its interior walls in stunning plasterwork and it can now be rented as holiday accommodation via The Landmark Trust.

Continue on down Sun Street (No. 13 on Map), noticing the tiny Georgian properties that would once have been thriving shops. At the end you reach Church Street which follows the line of the original Roman Road where Roman legions marched to the fort. Turn left and walk up the street, you will see the house where Bonnie Prince Charlie is supposed to have stayed (number 76).

At the head of the street you will see the majestic Judges’ Lodgings (No. 14 on Map) which was originally built in 1630 as the house of the Governor of the Castle. Following this it was used as accommodation for judges who travelled to cast their verdicts at the Assizes courts at the Castle.

Cross the main road at the pedestrian crossing then take the fork to the left of the Judges’ Lodgings and approach the Castle.

Look out for: You will see a heritage plaque for a former Dispensary (No. 15 on Map) of 1785 (number 19) which provided healthcare for the poor.

As you reach the top you will see Lancaster’s picture book Castle in all its glory – the epitome of a true English
stronghold. The portcullis is known as John O’Gaunt’s Gate and renders the castle a dominating force over the town.

Look out for: On the right of the gate is some older stonework – this is the Well Tower but locally it is known as the Witches Tower because this is where the famous Pendle Witches spent their last days before their demise.

Keep the Castle on your right and continue to walk down the hill. You will come to the side entrance of The Storey (No. 16 on Map) in which you will find The Print Room Café Bar and Lancaster Visitor Information Centre. 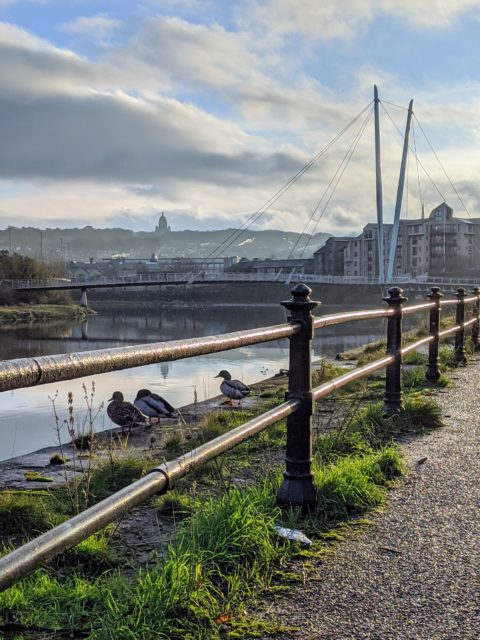 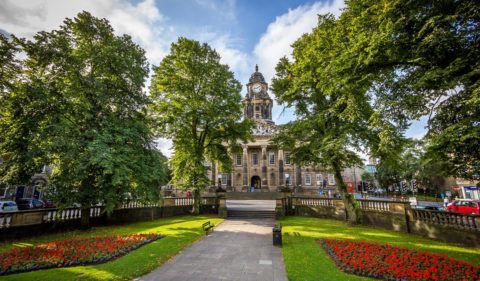 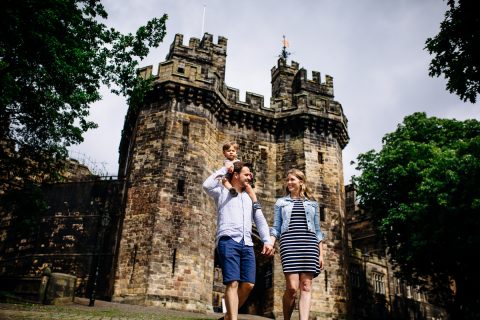